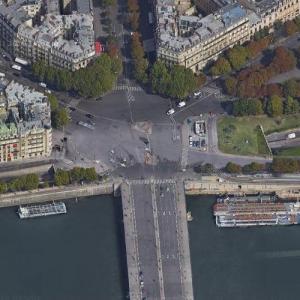 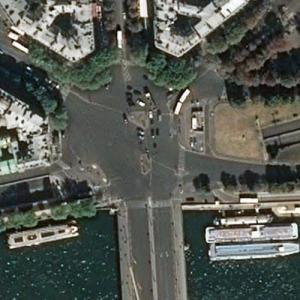 By dda @ 2005-08-04 17:31:09
@ 48.864376, 2.301604
Paris, France (FR)
The Alma tunnel lies beneath the Pont d'Alma (Alma bridge) in Paris, France. The bridge was built over the famous Seine river in the mid 1850s as an homage to the Battle of Alma during the Crimean War. It was reconstructed in the mid 1970s to accomodate the ever increasing traffic and to fix the slowly sinking bridge. The Alma tunnel is infamously known for the spot that Princess Diana, Princess of Wales, died in a car crash in the early hours of Sunday, August 31st 1997.

At the bridge's north end the Flame of Liberty stands an unofficial homage to Princess Diana. The Princess was merely passing through Paris after she had spent over a week with the son of Muhamed Al-Fayed, Dodi Fayed, on his yacht in the French and Italian Riviera. Fayed was the owner of the Hotel Ritz Paris and had employed the deputy head of security, Henri Paul, to drive the infamous black Mercedes with Diana, Fayed, and one of Fayed's bodyguards to his apartment in Paris. The Mercedes lost control while traveling at high speeds causing it to crash and instantly kill Fayed and Henri Paul. Lady Diana died later from injuries of the crash while a bodyguard in the car was seriously injured but survived.

It was first initially thought that paparazzi on motorcycles had caused the Mercedes to crash killing Princess Diana and 3 others. Later a judge ruled that the driver, Henri Paul, was actually intoxicated and on several other prescription drugs which caused him to lose control of the vehicle while being followed by the paparazzi. Princess Diana was 36 years old when she died. Her net worth at her death was $31.5 million according to Forbes.
Links: www.alfayed.com
86,687 views