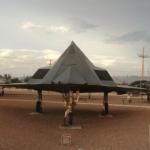 Scorpion 3 It was repainted to resemble the first F-117A used to drop weapons in combat. This aircraft was used for acoustics and navigation system testing.
Links: en.wikipedia.org
519 views