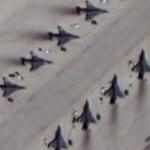 The F-4 is one of the most famous fighter aircraft of the post-World War II era, having been used in large numbers by the air forces of many western nations, where it gradually evolved in capability and mission diversity. First flown on 27 May 1958, the Phantom was developed as a private venture by McDonnell and was first ordered by the US Navy as a carrier-based attack aircraft armed with a 20-mm cannon (the F-4B). Soon after its introduction to active service in December 1960, a fly-off competition was conducted between the Phantom and various frontline Air Force fighters. The Phantom excelled in the competition in such a decisive way that the US Air Force ordered a slightly different version of the aircraft (the F-4C) and the Phantom went on to equip over three-quarters of the USAF's fighter wings.