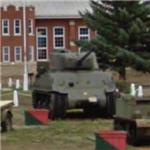 Production of the M4 medium tank exceeded 50,000 units and its chassis served as the basis for numerous other armored vehicles such as tank destroyers, tank retrievers, and self-propelled artillery. Only the Soviet T-34 tank was produced in larger numbers.
Links: en.wikipedia.org
385 views