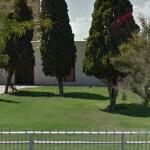 Built by pioneer Joseph Magoffin, he lived there with his wife, Octavia (MacGreal) until their deaths. Their daughter, Josephine, who had married William Jefferson Glasgow, a future Brigadier General in an extravaganza newspapers hailed as the 'wedding of the century', inherited the house. The last member of the family to live in the home was Octavia Magoffin Glasgow, Josephine's daughter, who died in 1986. Shy but friendly spirits reportedly still inhabit the home.
Links: en.wikipedia.org
464 views