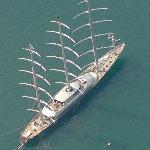 By Effi @ 2007-05-30 11:14:48
@ 44.090201, 9.866942
La Spezia, Italy (IT)
The Maltese Falcon is a clipper sailing luxury yacht owned by American centimillionaire Tom Perkins. It is the largest privately-owned sailing yacht in the world at 88 metres (289.1 feet). Ken Freivokh Design were the appointed designers (after an invention from the German engineer Wilhelm Prölss) for Maltese Falcon, the world's largest privately owned sailing yacht. The yacht was constructed in Tuzla, Turkey by the Italian firm Perini Navi. The Falcon was the third yacht built by this firm for Perkins.

The luxury yacht is currently registered in George Town, Cayman Islands; though it will shortly be registered in Valletta, Malta as Grand Harbour will be its homeport for the next 25 years. It completed its trial sail in the Marmara to the Bosphorus strait on 12 June 2006 and made its maiden voyage from Turkey to Italy via Malta in July 2006. S/Y ‘Maltese Falcon’ was be available for select yacht charters beginning in the summer of 2006 and charters out for between EUR€ 325000.00-335000.00 per week plus expenses.

She sports fifteen square sails (five per mast) which only take 6 minutes to open. The three carbonfibre masts, manufactured and assembled by a company financed by Perkins at the Yildiz Gemi yard in Tuzla, 50 miles south of Istanbul, Turkey, under the supervision of the English company Insensys are free-standing and rotating, an absolute world-first for an application of this size and complexity. The yacht is easily controlled and has been seen to sail off her anchor and away from berths within harbors. The yacht's sophisticated computer detects parameters such as wind speed automatically and displays key data, however Perkins does not permit the computer to actually sail the yacht. An operator must always activate the controls, never-the-less it is possible for a single person to pilot the yacht.

She also has two 1800 horse-power Deutz engines running at 1800 rpm with a top speed of 20 knots with minimal wave-making and virtually no vibration with a smooth and non-turbulent wake. The engines make almost no noise, described as being quieter than the air-conditioning.

The yacht has a permanent crew of 18 to maintain the technical aspects including the rig and to operate the onboard "hotel", which can accommodate twelve guests plus four guest staff.
Links: en.wikipedia.org, www.symaltesefalcon.com, www.wired.com
12,945 views