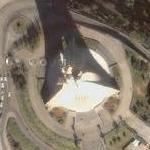 By AKpilotEMT @ 2006-06-30 03:42:51
@ 36.744627, 3.06967
Algiers, Algeria (DZ)
This concrete memorial to the struggle for Algerian independence, having been designed according to a somewhat brutalist aesthetic, isn't exactly pleasing to the eye. Yet it's undeniably striking - you won't fail to miss its imposing bulk from wherever you are in Algiers. The monument was opened in 1982, on the 20th anniversary of independence, and it presides over an area containing the best views out over the city." (lonelyplanet.com)
Links: en.wikipedia.org
1,183 views