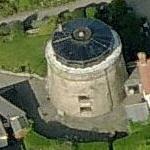 They stand up to 40 feet (12m) high (with two floors) and typically had a garrison of one officer and 15-25 men. Their round structure and thick walls of solid masonry made them resistant to cannon fire, while their height made them an ideal platform for a single heavy artillery piece, mounted on the flat roof and able to traverse a 360° arc. A few towers had moats for extra defence. The Martello towers were used during the first half of the 19th century, but became obsolete with the introduction of powerful rifled artillery. Many have survived to the present day, often preserved as historic monuments.
Links: en.wikipedia.org
673 views