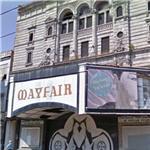 By kjfitz @ 2010-05-27 10:31:48
@ 39.295499, -76.619834
Baltimore, Maryland (MD), US
" The Mayfair Theatre has been around since the 1870s. The structure was originally known as the “Natatorium” meaning indoor swimming pool. It housed a subterranean spa with Turkish baths, steam rooms, and what was once the city’s largest swimming pool. There is still evidence of the baths & steam rooms hidden away in the basement of the theater. The structure would later be converted into a movie house and is now the oldest standing movie theater in the city. The theater closed up in the 1980s and has been sealed up since. Looking at the front facade the theater appears to be in good shape but sometime during the 1990s weather and neglect took their toll on the structure and the roof collapsed destroying most of the interior structure." urbanatrophy.com
Links: downloads.yahoo.com
483 views