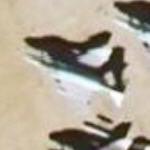 By kjfitz @ 2007-03-11 21:58:26
@ 33.882688, -117.266074
Riverside, California (CA), US
The F-4 was designed in 1958 as a company venture by McDonnell Douglas to meet future needs and it turned into the greatest post World War II fighter ever built. Considered by some the fastest, most versatile and effective aircraft ever built. The F-4 was initially designed as an attack bomber without internal weapons. The Phantom carried a greater bomb load than a B-29, yet was an effective fighter shooting down 106 out of 137 Migs destroyed in the Vietnam War. Israel has used F-4’s in all of its major confrontations, at one time shooting down over 70 Syrian aircraft without a Phantom lost. The F-4E was flown by the US Air Force Demonstration team The Thunderbirds from 1969 through the mid 1970’s. F-4E’s were also flown as aircraft known as Wild Weasels and were active in the Persian Gulf War.

The F-4E was a marked change from the original design of the phantom and a no-nonsense adaptation to the lessons learned in Vietnam. With changes in avionics, a new wing (more forgiving in stalls and spins caused by harsh maneuvers with heavy bomb loads) and the addition of an internally mounted 20mm M61 Vulcan cannon fed by a 640 round drum magazine. The F-4E would remain the basic airframe for the follow-on versions in the Phantom production life, the F-4G being the last version produced.

According to the Air Force Historical Research Agency (AFHRA/RSA), Maxwell AFB, AL, the museum’s F-4E has the following history:

Manufactured by McDonnell-Douglas Aircraft, in St. Louis, MO and gained by the United States Air Force on May 9 1969.

Jan 1990 Aircraft dropped from U. S. Air Force inventory with a total of 4887.3 flight hours on the airframe.

Retired due to structural damage to the right engine nacelle with over 5,000 flying hours, the plane is substantially intact, including avionics, ejection seats, and engines. It was placed on exhibit with the museum in 1993. This aircraft is on loan from the USAF.
Links: marchairmuseum.com
753 views