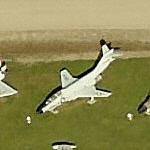 By kjfitz @ 2007-05-09 00:42:10
@ 42.243124, -83.513012
Ypsilanti, Michigan (MI), US
The McDonnell F-101 Voodoo was a supersonic military fighter flown by the USAF and the RCAF. Initially designed as a long-range bomber escort (known as a penetration fighter) for the Strategic Air Command, the Voodoo served in a variety of other roles, including the fighter bomber, all-weather interceptor aircraft and photo reconnaissance roles. Reconnaissance Voodoos saw extensive service during the Vietnam War.

F-101B prototype based on the F-101A airframe; the second prototype was built with a different nose.
Links: en.wikipedia.org
664 views