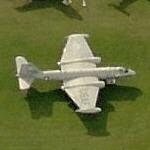 While the USAF found the B-57A lacking, the photoreconnaissance RB-57A saw some operational use. First flying in October 1953, RB-57As fully equipped the 363rd Tactical Reconnaissance Wing at Shaw Air Force Base by July 1954. The aircraft were also deployed with USAF squadrons in Germany, France, and Japan. However, operational readiness was poor and the aircraft suffered from significant production delays because of engine problems. Wright had subcontracted production of J65 engines to Buick which resulted in slow deliveries and tendency to burn oil which filled the cockpit with smoke. The problems were ameliorated when Wright took over the production in 1954. RB-57As also suffered from a high accident rate caused in part by very poor single-engine handling, which resulted in the entire fleet spending much of 1955 on the ground. By 1958, all RB-57As were replaced in active service by Douglas RB-66Bs and RF-101As. Air National Guard units extensively used RB-57As for photographic surveys of the United States and traded in their last aircraft in 1971. Two RB-57As were used by the Republic of China Air Force for reconnaissance missions over People's Republic of China. One of these was shot down by a Chinese Mikoyan-Gurevich MiG-17 on 18 February 1958. Two other RB-57As were used by the Federal Aviation Administration to plan high-altitude airways for the upcoming jet passenger aircraft.
Links: en.wikipedia.org
791 views