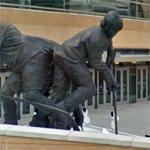 After being selected as the first pick in the 1984 draft, he spent all 17 of his NHL seasons with Pittsburgh. In 915 regular season games, he scored 690 goals and 1033 assists. He has been a principal owner of the team since 1999.

Unveiled on March 7, 2012, this statue weighs 4700 pounds and stands over 10 feet high. It depicts a scene from a game against the New York Islanders on December 20, 1988, in which Lemieux sliced through defensemen Rich Pilon and Jeff Norton to score a goal. The moment was made famous in a notable Sports Illustrated photograph.
Links: www.nhl.com
1,019 views