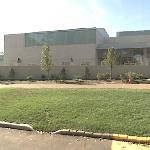 By kkeps @ 2010-02-13 11:30:35
@ 38.647652, -90.302776
St Louis, Missouri (MO), US
The Mildred Lane Kemper Art Museum, sometimes referred to simply as "The Milly", is an art museum located on the campus of Washington University in St. Louis, within the university's Sam Fox School of Design & Visual Arts. It was founded in 1881 as the St. Louis School and Museum of Fine Arts, and initially located in a building in downtown St. Louis. It is the oldest art museum west of the Mississippi river. Its collection was formed in large part by acquiring significant works by artists of the time, a legacy that continues today. Now one of the finest university collections in the United States, the Museum contains strong holdings of 19th-, 20th-, and 21st-century European and American paintings, sculptures, prints, installations, and photographs. The collection also includes some Egyptian and Greek antiquities, Old Master prints, and the Wulfing Collection of approximately 14,000 ancient Greek, Roman, and Byzantine coins.
Links: en.wikipedia.org
542 views