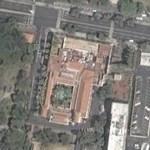 The Venezuelan coup attempt of 2002 took place here. This was a failed military coup d'état on April 11, 2002. It saw the brief overthrow and arrest of Venezuelan President Hugo Chávez and the installation of a businessman, Venezuelan Federation of Chambers of Commerce (Fedecámaras) president Pedro Carmona, as interim President for 47 hours. In Caracas, the coup led to riots and a pro-Chávez uprising that the Metropolitan Police attempted to suppress. Key sectors of the military and parts of the anti-Chávez movement refused to back Carmona. The pro-Chávez Presidential Guard eventually retook the Miraflores presidential palace without firing a shot, leading to the collapse of the Carmona government.
2,913 views