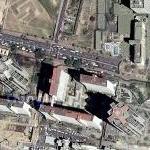 Within the complex are the Twin Towers of Parque Central which are two skyscrapers that, for decades, have become Caracas' architectural icon. From 1979 (when the West Tower was opened) until 2003, they held the title of tallest skyscrapers in Latin America until they were overtaken by Torre Mayor in Mexico City.
Links: en.wikipedia.org
1,037 views