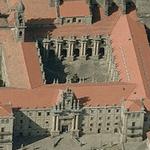 By adrbr @ 2008-03-04 18:04:52
@ 42.881775, -8.544301
Santiago de Compostela, Spain (ES)
With a surface area of 20,000 square meters, the monastery of San Martín Pinario is the second largest religious monument in Santiago after the Cathedral. The main façade, in the Baroque style like most of the rest of the work, is 100 m long. The old church was founded in the 12th century and the current one dates from the 17th century. The church has an impressive Plateresque façade from the late 16th century. Peña y Toro, Melchor de Velasco and Domingo de Andrade, three of the best artists of the time, were involved in the decoration. The enormous barrel arch vault stands out.
907 views