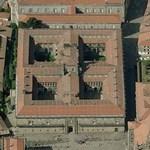 By DonMartini @ 2007-11-24 03:01:46
@ 42.881619, -8.545854
Santiago de Compostela, Spain (ES)
Historically the Reyes Catolicos building has seen various transitions in its use. It was commissioned by the Spanish king in the fifteenth century as a hostal and hospital for Santiago’s visiting pilgrims, but it has some other idiosyncrasies. There is a narrow corridor in front of the building, denominated by a rope chain and in times past any criminal or wanted man could seek harbour in this area and be free from arrest. This rule could of course be lifted if the hostel’s principal gave his "consent", in which case the law breaker could be taken into custody, tried and sentenced.

The Hostal de los Reyes Catolicos’ present use as a parador was initiated in 1953 and it offers luxurious accommodation in the center of Santiago for those privileged enough to afford it. The hotel is often used by passing dignitaries and those with more flexible accommodation budgets. It is one of the four iconic buildings that surround the Obradoiro plaza, Galicia and Spain’s largest city square.
Links: www.galiciaguide.com
593 views