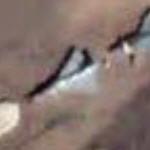 The later PQM-102B had improved systems and added a low-altitude mode (for altitudes down to 60 m (200 ft)), for which a radar altimeter was installed. By relocating the electronics, the cockpit of the PQM-102B could reportedly be kept free for optional manned operation.

I'm guessing that this one may be used in conjunction with the rocket sled off just to the west.
Links: www.designation-systems.net
1,139 views