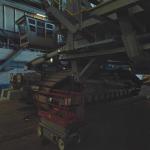 By kjfitz @ 2013-02-24 20:43:31
@ 28.585731, -80.651325
Cape Canaveral, Florida (FL), US
The crawler-transporters are a pair of tracked vehicles used to transport spacecraft from NASA's Vehicle Assembly Building (VAB) along the Crawlerway to Launch Complex 39. They were originally used to transport the Saturn IB and Saturn V rockets during the Apollo, Skylab and Apollo–Soyuz programs. They were then used to transport Space Shuttles from 1981 to 2011. The crawler-transporters carry vehicles on the Mobile Launcher Platform, and after each launch return to the pad to take the platform back to the VAB.