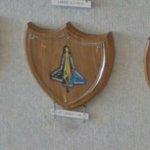 The Space Shuttle Columbia disaster occurred on February 1, 2003, when shortly before it was scheduled to conclude its 28th mission, STS-107, the Space Shuttle Columbia disintegrated over Texas and Louisiana during re-entry into the Earth's atmosphere, resulting in the death of all seven crew members. Debris from Columbia fell to Earth in Texas along a path stretching from Dallas suburb Trophy Club to Tyler, as well as into parts of Louisiana.
Links: www.nasa.gov
690 views