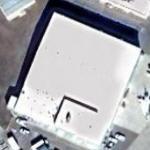 The two Global Hawks were the first and sixth aircraft built under the original development program sponsored by the Defense Advanced Research Projects Agency, and were made available to NASA when the Air Force had no further need for them.
Links: www.skycontrol.net
761 views