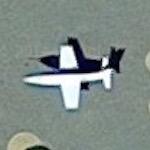 By kjfitz @ 2007-12-26 17:50:45
@ 34.950424, -117.88792
Edwards AFB, California (CA), US
The Bell X-1, originally designated XS-1, was a joint NACA-U.S. Army Air Forces/US Air Force supersonic research project and the first aircraft to exceed the speed of sound in controlled, level flight. It was the first of the so-called X-planes, an American series of experimental aircraft designated for testing of new technologies and usually kept highly secret.

* A turbopump fuel feed system, which eliminated the high-pressure nitrogen fuel system used in '062 and '063. (Concerns about metal fatigue in the nitrogen fuel system resulted in the grounding of the X-1-2 after its 54th flight in its original configuration.).[8]
* A re-profiled super-thin wing (3⅜ inches at the root), based on the X-3 Stiletto wing profile, enabling the X-1E to reach Mach 2.

* A 'knife-edge' windscreen replaced the original greenhouse glazing, an upward-opening canopy replaced the fuselage-side hatch and facilitated the inclusion of an ejection seat.

* The addition of 200 pressure ports for aerodynamic data, and 343 strain gauges to measure structural loads and aerodynamic heating along the wing and fuselage.

Aircraft #46-062 is currently on display in the Milestones of Flight gallery of the National Air and Space Museum in Washington, DC, alongside the Spirit of St. Louis and SpaceShipOne.

Aircraft #46-063, now the X-1E, is on display in front of the NASA Dryden Flight Research Center headquarters building.