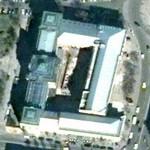 It is situated in the imposing 19th-century Neoclassic edifice of the former Royal Printing Office. It was built between 1882 and 1884 during the rule of Knyaz Alexander Battenberg to the designs of Austrian architect Friedrich Schwanberg and reconstructed after it suffered significant damage during the bombing of Sofia in World War II.
Links: en.wikipedia.org
510 views