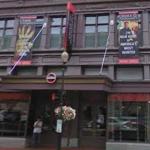 By kkeps @ 2011-03-25 03:45:33
@ 38.896702, -77.021916
Washington, Washington, DC (DC), US
The National Museum of Crime & Punishment is a privately owned museum dedicated to the history of criminology and penology in America. It is located in the Penn Quarter neighborhood of Washington, D.C., half a block south of the Gallery Place-Chinatown Metro station. The museum, which opened in May 2008, was built by Orlando businessman John Morgan in partnership with John Walsh, host of America's Most Wanted, at a cost of US$21 million. Unlike most museums in Washington, DC, the National Museum of Crime & Punishment is a for-profit enterprise.

More than 700 artifacts in 28,000 square feet (2,600 m2) of exhibition space relate the history of crime and the consequences of crime in America and in American popular culture. The museum features exhibits on colonial crime, pirates, Wild West outlaws, gangsters, the Mob, mass murderers, and white collar criminals. Twenty-eight interactive stations include the high-speed police chase simulators used in the training of law enforcement officers, and a Firearms Training Simulator (F.A.T.S.) similar to that utilized by the FBI.
Links: en.wikipedia.org
485 views