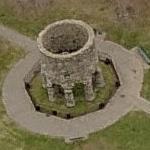 It is commonly considered to have been a windmill built in the mid 17th century. However, the tower has received attention due to speculation that it is actually several centuries older and represents evidence of pre-Columbian trans-oceanic contact.
Links: en.wikipedia.org
1,355 views