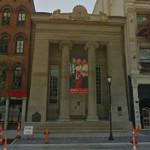 By WacoKidd110 @ 2013-09-17 13:31:00
@ 38.256529, -85.755756
Louisville, Kentucky (KY), US
The Old Bank of Louisville is a National Historic Landmark in Louisville, Kentucky. Completed in 1837, it was made of brick and limestone. Of United States small-scale commercial architecture, it is considered one of the most sophisticated. The narrow downtown lot saw classical idioms adapted to it. Its monumental distyle-in-antis doorway is particularly notable. It was originally thought to be designed by Gideon Shryock, but instead was designed by James H. Dakin. Shryock was construction superintendent for the project.
Links: en.wikipedia.org
769 views