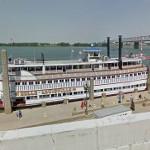 By WacoKidd110 @ 2013-09-16 19:02:38
@ 38.258877, -85.755719
Louisville, Kentucky (KY), US
Belle of Louisville is a steamboat owned and operated by the city of Louisville, Kentucky and moored at its downtown wharf next to the Riverfront Plaza/Belvedere during its annual operational period. Originally named Idlewild, she was built by James Rees & Sons Company in Pittsburgh, Pennsylvania for the West Memphis Packet Company in 1914 and was first put into service on the Allegheny River. Constructed with an all-steel superstructure and asphalt main deck, the steamboat is said to hold the all-time record in her class for miles traveled, years in operation, and number of places visited.
Links: en.wikipedia.org, virtualglobetrotting.com
445 views