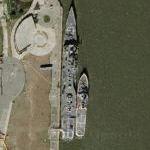 By kjfitz @ 2009-09-28 16:12:02
@ 30.688718, -88.03731
Mobile, Alabama (AL), US
The Oliver Hazard Perry class is a class of frigates named after the American Commodore Oliver Hazard Perry, the hero of the naval Battle of Lake Erie. Also known as the Perry or FFG-7 class, the warships were designed in the United States in the mid-1970s as general-purpose escort vessels inexpensive enough to be bought in large quantities to replace World War II-era destroyers. Fifty-five ships were built in the United States: 51 for the United States Navy and four for the Royal Australian Navy (RAN). In addition, eight were built in the Republic of China (Taiwan), six in Spain, and two in Australia for their navies. Former U.S. Navy warships of this class have been sold/donated to the navies of Bahrain, Egypt, Poland, and Turkey.
Links: en.wikipedia.org
680 views