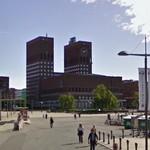 By Dania @ 2010-02-08 22:59:00
@ 59.910561, 10.729109
Oslo, Norway (NO)
The Oslo City Hall (Norwegian: Oslo rådhus) houses the City Council, city administration, and art studios and galleries. The construction started in 1931, but was paused by the outbreak of World War II, before the official inauguration in 1950. Its characteristic architecture, artworks and the Nobel Peace Prize ceremony makes it one of Oslo's most famous buildings. It was designed by Arnstein Arneberg and Magnus Poulsson. The roof of the eastern tower has a 49-bell carillon which plays every hour.

It is situated in Pipervika in central downtown Oslo. The area was completely renovated and rebuilt to make room for the new city hall, back in the late 1920s.

The Nobel Peace Prize is presented to the winner on 10th of December each year in Oslo City Hall.
Links: en.wikipedia.org
599 views