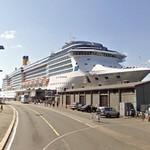 By Dania @ 2010-02-08 23:04:51
@ 59.90782, 10.734849
Oslo, Norway (NO)
Costa Mediterranea is a Spirit class cruise ship operated by Costa Cruises. She was constructed at the Kvaerner Masa-Yards (currently Aker Finnyards) in Helsinki, Finland at a cost of over 400 million euros. Her design, like sister ship Costa Atlantica's, was derived from Carnival Cruise Lines' Spirit Class ships (Carnival Spirit, Carnival Pride, Carnival Legend and Carnival Miracle). On June 16, 2003 she departed on her maiden voyage from Genoa to Spain and Portugal.