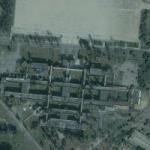 By kjfitz @ 2009-08-07 09:12:35
@ 34.061544, 71.978967
Risalpur, Pakistan (PK)
The Pakistan Air Force Academy, located in the remote town Risalpur of Nowshera District in the North West Frontier Province of Pakistan, is the premier cadet training institution of the Pakistan Air Force. Its role is the training of General Duty Pilots (GDP), Aeronautical and Avionics Engineers and the initial training of other Ground Branch cadets. Cadets of all the branches join the Academy following a recommendation by the Inter Services Selection Board (ISSB) of Pakistan.

The Academy was created in 1910 and was a former base of the Royal Flying Corps. It officially became the airbase of the PAF on 15 August 1947. On January 21, 1967, it was again upgraded to the status of an academy by then-President Ayub Khan. Currently, it consists of 5 different components.
Links: en.wikipedia.org
2,035 views