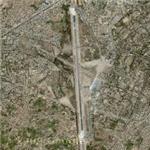 It was originally the site of a United States Air Force Security Service listening post from the 1950's until 1970.

On December 9, 2007, unidentified miscreants fired four rockets, two of which landed near the PAF Airbase and two landed in the vacant ground near the Peshawar International Airport. However, none of them caused any damage to life or property.
Links: en.wikipedia.org
3,094 views