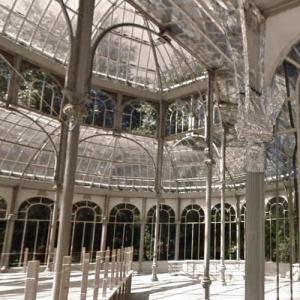 The Palacio de Cristal ("Crystal Palace") is a glass and metal structure located in Madrid's Buen Retiro Park. It was built in 1887 to exhibit flora and fauna from the Philippines. The architect was Ricardo Velázquez Bosco.

The Palacio de Cristal, in the shape of a Greek cross, is made almost entirely of glass set in an iron framework on a brick base, which is decorated with ceramics. The architecture was influenced by the glass and iron structural techniques of Joseph Paxton (who was responsible for London's Crystal Palace and also for greenhouses such as the Palm House at Kew Gardens).

The structure was designed in a way that would allow it to be re-erected on another site (as happened to the equivalent building in London). However, the building has remained on the original site, next to a lake, and has been restored to its original appearance. It is no longer used as a greenhouse, and is currently used for art exhibits..