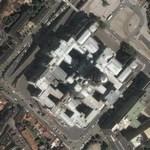 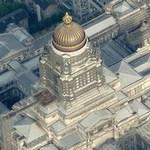 It was built between 1860 and 1880 by Joseph POELAERT in eclectic style. It is believed to be the biggest building constructed in the 19th century in the world.
The palace of justice is situated on top of a hill, which was called "gallows hill" in the Middle Ages. The dimensions of the palace are awesome: it is 105 m high and covers a total surface of 24.000 square meters. It still functions as the supreme court of law for Belgium.
Links: en.wikipedia.org
756 views