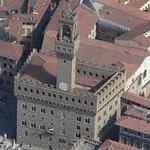 By AdrianoMark @ 2008-02-02 05:16:47
@ 43.769227, 11.256857
Florence, Italy (IT)
The Palazzo Vecchio (Old Palace) is the town hall of Florence, Italy. This massive, Tuscan Gothic,crenellated fortress-palace is among the most impressive town halls of Tuscany. Overlooking the Piazza della Signoria with its copy of Michelangelo's David statue as well the gallery of statues in the adjacent Loggia dei Lanzi, it is one of the most significant public places in Italy.

Originally called the Palazzo della Signoria, after the Signoria of Florence, the ruling body of the Republic of Florence, it was also given several other names: Palazzo del Popolo, Palazzo dei Priori, and Palazzo Ducale, in accordance with the varying use of the palace during its long history. The building acquired its current name when the Medici duke's residence was moved across the Arno to the former Palazzo Pitti.
1,602 views