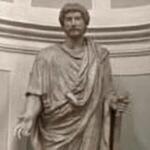 Hadrian (Latin: Publius Aelius Trajanus Hadrianus Augustus 24 January 76 – 10 July 138), commonly known as Hadrian and after his apotheosis Divus Hadrianus, was Roman Emperor from 117 to 138. He is best known for building Hadrian's Wall, which marked the northern limit of Roman territory in Britain. In Rome, he re-built the Pantheon and constructed the Temple of Venus and Roma. In addition to being emperor, Hadrian was a humanist and was philhellene in all his tastes. He was the third of the so-called Five Good Emperors.
Links: en.wikipedia.org
478 views