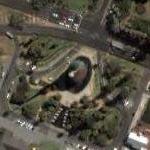 It is the Swan Bells Tower, one of the largest musical instruments on earth, housing the twelve bells of Saint Martin in the Fields church, the parish church of Buckingham Palace.

Recorded as being in existence from before the 14th century, they have rung out to celebrate England's victory over the Spanish Armada in 1588, the homecoming of Captain James Cook after his voyage of discovery in 1771 and the World War II victory at El Alamein. The bells have also rung in the New Year at Trafalgar Square for more than 275 years, and have celebrated the coronation of every British monarch since King George II in 1727. Children sing of the bells in the popular "Oranges and Lemons" nursery rhyme, "You owe me five farthings say the bells of St Martin's".