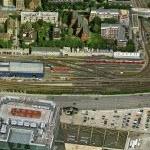 By chaswatson @ 2014-11-25 00:37:29
@ 51.5076, -0.0168
London, United Kingdom (GB)
The DLR (Docklands Light Railway) is a rail transit system that opened in 1987 to serve the Docklands area of London. It extends north to Stratford International, south to Lewisham, west to Bank and Tower Gateway in the City, and east to Beckton, London City Airport and Woolwich Arsenal.

The DLR is 25 miles (40km) in length with 45 stations. There are six main branches: to Lewisham in the south, Stratford and Stratford International in the north, Beckton and Woolwich Arsenal in the east, and City of London in the west. This station, Poplar, is at the heart of the DLR system. This is where north/south and east west branches cross and there is also a depot here.
Links: en.wikipedia.org
442 views