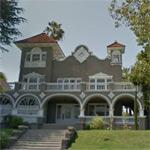 By neotrix @ 2008-08-30 02:47:33
@ 34.045027, -118.281368
Los Angeles, California (CA), US
Powers House at 1345 Alvarado Terrace (HCM #86) was built in 1903 for Pomeroy Wells Powers and his wife Ida. Designed by Arthur L. Haley, the home is built in the Mission style and has been described as "exuberant" and the "flashiest on the block" for its fanciful stucco curlicue.[5] The stucco house has an arcaded veranda that supports a second-floor balcony. Rising from the balconly are towers connected by a curved parapet wall. The large corner tower has a loft room accessible only from the home's exterior. Pomeroy Powers was a lawyer who was one of the original developers of Alvarado Terrace. He was also a member of the City Council and an officer of the Juanity Mining Company and the Short Line Beach Company.[2] The house was restored in the mid-1970s by owner Ann Gutierrez, including new walls, plumbing, wiring and ceilings.[5] In the 1990s, the house was used as a restaurant known as Salisbury Manor, with dining downstairs and the upstairs consisting of restored bedrooms available for viewing by patrons. A review of the restaurant noted that, "with some myopia and imagination," the restaurant and neighborhood allowed a glimpse of an earlier era.[7] "What with the good decent food, a dose of history tempered with nostalgia, a seat in a shaft of afternoon sun and a cup of chamomile tea in my hand, I couldn't help but think there are far worse things in life than a meal on Alvarado Terrace."
Links: en.wikipedia.org
818 views