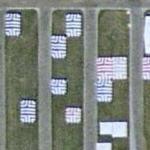 The event is presented by the Experimental Aircraft Association (EAA), a national/international organization based in Oshkosh. The airshow is seven days long and typically begins on the last Monday in July. The airport's control tower is the busiest control tower in the world during the gathering.
Links: en.wikipedia.org
1,000 views