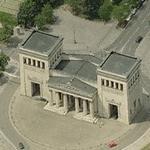 By adrbr @ 2008-04-17 13:09:56
@ 48.146018, 11.564041
Munich, Germany (DE)
The building constructed in Doric order was completed by Leo von Klenze in 1862 and evoke the monumental entrance of the Propylaea for the Athenian Akropolis. The gate was created as a memorial for the accession of Otto of Greece, a son of the principal King Ludwig I of Bavaria. The reliefs and sculptures celebrating the Bavarian prince and the Greek War of Independence were created by Ludwig Michael Schwanthaler.
596 views