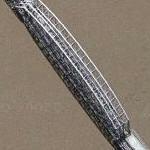 The problem is, no one showed up.

The Purple People Bridge, a former railroad and automobile trestle across the Ohio River, was given its goofy name by the promoter, Dennis Speigel (focus groups decided that it should be painted purple.). It spans 2,670 feet in a series of five ironwork humps, which peak at about 140 feet high. It became an all-pedestrian bridge in 2001, and the Purple People Bridge Climb was introduced in June 2006.

* Climbers are required to wear full-body purple and yellow jump suits that look stupid and must be unbearably hot on a sunny summer's day.

* Climbers must drag along a tether that is attached to a track that parallels the walkway.

* It isn't a "climb" like rock climbing; it's just walking up and down a succession of metal staircases.

* It takes 2.5 hours, including a full hour of orientation and video-watching.

* No photography is allowed.

* Climbers must go in groups with a guide, and must wear headsets that constantly broadcast music and sound effects.

* Similar bridge climbs in Australia and New Zealand -- the inspiration for this attraction -- offer breathtaking views and stunning vistas. The Purple Bridge Climb offers a view of Cincinnati and the brown Ohio River.

* It costs $60.00 (You can walk across the bridge on the deck, rather than on the superstructure, for free.).


Dennis Speigel has offered numerous explanations for the lack of public enthusiasm for his attraction: the price of gasoline, the economy, the heat, the rain. He has declined to divulge how many people have paid to climb the bridge. But he has lowered the price -- for weekend climbs at least -- to $40.
Links: www.purplepeoplebridgeclimb.com
965 views