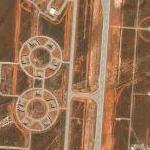 By kjfitz @ 2006-10-21 11:45:23
@ -22.234685, 114.091902
Learmonth, Australia (AU)
RAAF Base Learmonth is a Royal Australian Air Force base located near the town of Exmouth on the north-west coast of Western Australia. As RAAF Base Learmonth is one of the RAAF's three "bare bases", no RAAF units are currently based at Learmouth and it is maintained by a small caretaker staff during peacetime.

RAAF Base Learmonth was an important RAAF base during World War II. During the war the base was code-named "Potshot".
Links: en.wikipedia.org
793 views