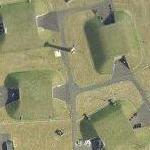 RAF Greenham Common and RAF Molesworth were selected as the beddown sites for the GLCM in the UK. Preparation began for the ground launched cruise missile mission, and new facility construction began in September 1985. The 303d Tactical Missile Wing was activated on 12 Dec 86 at RAF Molesworth.

The 303d Tactical Missile Wing's mission changed significantly after the United States and the Soviet Union agreed to limit Intermediate- range missiles in 1988 under the Intermediate-range Nuclear Forces Treaty. When the INF Treaty was signed in December 1987, the US Air Force had just begun the deployment of INF GLCM missiles at Molesworth. Eighteen missiles and six launchers were listed in the treaty's Memorandum of Understanding and had been inspected during baseline. Following that period, the Molesworth GLCMs were withdrawn from the force, prepared for shipping, and transported to the United States for elimination at Davis-Monthan AFB in Arizona. At the same time, the Air Force prepared the site at Molesworth to be closed out in accordance with the provisions of the treaty. The first removal of operation cruise missile treaty-limited items from Western Europe occurred Sept 8, 1988. Following the formal closeout declaration in December 1988, Soviet INF inspectors arrived at Molesworth on January 19, 1989, for the closeout inspection.