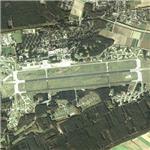 RAF Bruggen was situated next to the village of Elmpt, approximately 43 km west of Düsseldorf near the German-Netherlands border. The base was named after the village of Bruggen, the nearest rail depot. Construction began in mid-1952 which involved the clearing of dense forest and draining of marshland. The station became active in 1953 during the rapid expansion of NATO forces in Europe.
Links: en.wikipedia.org
4,303 views