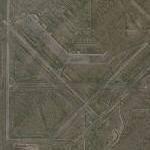 Today, all of the runways, taxiways & ramps of this huge airfield still exist. Although many of the wartime buildings were sold at action and moved to Marfa or nearby Alpine, Texas, large numbers of wartime buildings still stand on the base with several hangars in existence. One of the hangars has been turned into an art gallery as part of the Chinati Foundation. The old officer's club has been turned into a B&B. In the basement, there is a mural that was drawn by World War II German POWs. Slowly, however, the West Texas desert is reclaiming the large airbase, with tall grass being found on the parking apron, and deteriorating concrete evident on the taxiways and runways.

The original main entrance road still exists, however it is gated and locked. A small brass memorial plaque can be found on the remains of the World War II adobe block entrance to the post.
Links: en.wikipedia.org
2,026 views