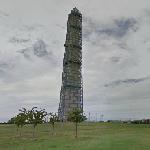 On July 9, 2012, The National Park Service announced that the monument could be closed for repairs until 2014. NPS said a portion of the plaza at the base of the monument will be removed and scaffolding constructed around the exterior. In July 2013, lighting was added to the scaffolding.[58] Some stone pieces saved during the 2011 inspection will be refastened to the monument, while "Dutchman patches" will be used in other places. Several of the stone lips which help hold the pyramidion's 2,000-pound (910 kg) exterior slabs in place were also damaged, so engineers will install metal brackets to more securely fasten them to the monument.
Links: en.wikipedia.org
485 views