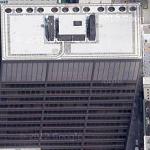 By kkeps @ 2014-02-04 20:06:05
@ 41.885469, -87.629871
Chicago, Illinois (IL), US
The Richard J. Daley Center, also known by its courtyard Daley Plaza and named after longtime mayor Richard J. Daley, is the premier civic center of the City of Chicago in Illinois. Situated on Randolph and Washington Streets between Dearborn and Clark Streets, the Richard J. Daley Center is considered one of Chicago's architectural highlights. The main building was designed in the international architectural style by Jacques Brownson of the firm C. F. Murphy Associates and completed in 1965. At the time it was the tallest building in Chicago, but only held this title for four years until the John Hancock Center was completed. Originally known as the Chicago Civic Center, the building was renamed for Mayor Daley on December 27, 1976, seven days after his death. The 648-foot (198 m), thirty-one story building features Cor-Ten, a self-weathering steel. Cor-Ten was designed to rust, actually strengthening the structure and giving the building its distinctive red and brown color. The Daley Center has 30 floors, and is the tallest building in the world with fewer than 40 stories (a typical 648-foot (198 m) building would have 50-60 stories).
Links: en.wikipedia.org, moviemaps.org
651 views