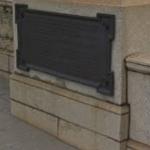 In 1344-5 the bridge was again restored but proved inadequate for the increasing traffic.

In 1388 a substantial stone bridge of stone was built by Sir Robert Knolles and Sir John de Cobham which lasted until 1856 when it was replaced by one of cast iron from the design of William Cubitt. M.I.C.E.

That bridge having proved insufficient for navigation and modern road traffic was rebuilt in steel and granite in 1914 from the design of Arthur Cameron Hurtzig and John James Robson M.M.INST.C.E."
Links: rbt.org.uk
632 views